December 14, 2016 Women’s Mental Health and Well-being 5 Years After Receiving or Being Denied an Abortion A Prospective, Longitudinal Cohort Study

Key Points Question Are there associations between having or being denied an abortion with women’s mental health and well-being ?

Meaning Abortion denial may be initially associated with psychological harm to women and findings do not support restricting abortion on the basis that abortion harms women’s mental health.

Abstract Importance The idea that abortion leads to adverse psychological outcomes has been the basis for legislation mandating counseling before obtaining an abortion and other policies to restrict access to abortion.

Objective To assess women’s psychological well-being 5 years after receiving or being denied an abortion.

Design, Setting, and Participants This study presents data from the Turnaway Study, a prospective longitudinal study with a quasi-experimental design. Women were recruited from January 1, 2008, to December 31, 2010, from 30 abortion facilities in 21 states throughout the United States, interviewed via telephone 1 week after seeking an abortion, and then interviewed semiannually for 5 years, totaling 11 interview waves. Interviews were completed January 31, 2016. We examined the psychological trajectories of women who received abortions just under the facility’s gestational limit (near-limit group) and compared them with women who sought but were denied an abortion because they were just beyond the facility gestational limit (turnaway group, which includes the turnaway-birth and turnaway-no-birth groups). We used mixed effects linear and logistic regression analyses to assess whether psychological trajectories differed by study group. Main Outcomes and Measures We included 6 measures of mental health and well-being : 2 measures of depression and 2 measures of anxiety assessed using the Brief Symptom Inventory, as well as self-esteem, and life satisfaction. 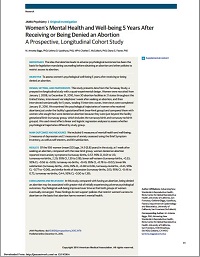 December 14, 2016 Women’s Mental Health and Well-being 5 Years After Receiving or Being Denied an Abortion A Prospective, Longitudinal Cohort Study